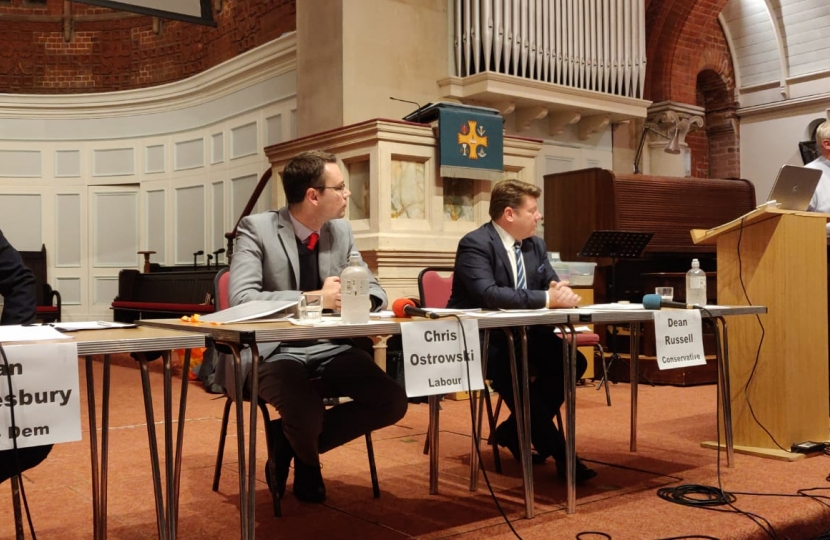 This week, Dean Russell confirmed that he is the only candidate in this election who will respect the vote of the British people and help to deliver our departure from the EU. Whereas Dean voted Leave in 2016 and continues to campaign to deliver the result, both the Labour and Liberal Democrat candidates want a second referendum and would back Remain – offering yet more uncertainty and delay.

At a special husting, organised by Watford Churches Together and the Watford Observer at the Beechen Grove Baptist Church, he and other candidates to be our town’s next MP faced a sustained grilling from local residents on a broad range of issues ranging from Brexit and the NHS to homelessness and the environment.

Dean affirmed his determination to work cross-party to tackle rough living and build on the strong foundations laid by the Government’s Homelessness Reduction Act, and to advance the green agenda by backing a ban on single-use plastics.

He will also work with people of different parties and opinions, from across the House of Commons and beyond, to ensure that Watford’s NHS services get the resources they need.

Speaking after the meeting, Dean said:

“It was great to see so many local people turn out to put their questions to me this evening. We covered a lot of ground, and I think the choice for Watford is clearer than ever: vote Conservative to deliver Brexit and the strong public services we need; or risk more debt, more delay, and a second referendum."

Harry spent over 30 years in the Army working with the Royal Household and overseeing the feeding of troops worldwide.