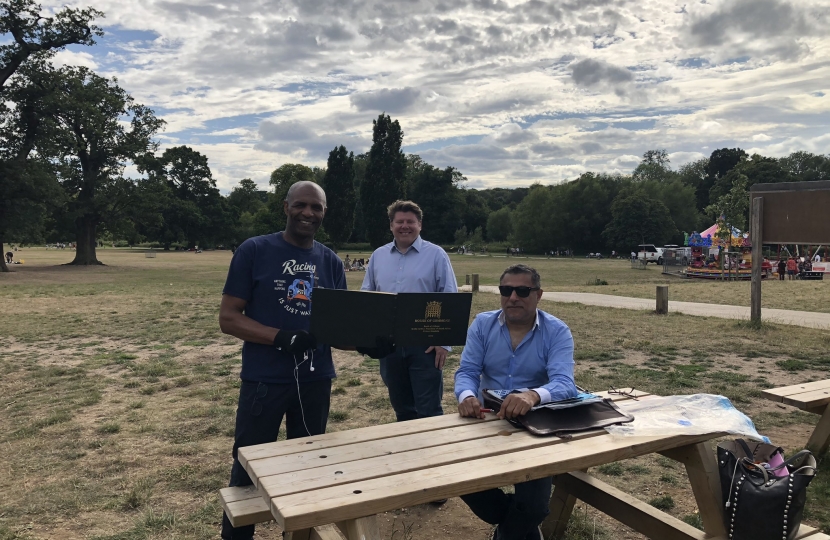 Watford FC legend Luther Blissett was invited by the Watford MP to sign the Nelson Mandela memorial book at Cassiobury Park. Dean Russell is the ambassador for the memorial book, having been asked to do so by the book’s founder, Nic Careem.

Nic Careem founded the Nelson Mandela memorial book as a way to pay tribute to the anti-aparthied former president of South Africa, Nelson Mandela. The book has since been signed by celebrities and world leaders including former US president Barack Obama and Watford born and raised Geri Halliwell.

Current plans are afoot to publish the book annually, with Nic Careem and his ambassadors continually seeking additional well-known figures to sign it. All profits from the annual sales of the book will help support children's causes across the world.

Nic Careem said: I am delighted that former Watford FC star Luther Blisset joined the likes of President Obama and David Beckham, Thierry Henry in adding a handwritten message in The House of Commons Tribute book to the late Nelson Mandela. Huge thanks to local MP Dean Russell, an Ambassador for the book for nominating Mr Blissett.

Dean Russell said: I feel privileged to have been asked to become the ambassador for the Nelson Mandela memorial book. With Luther’s work as an anti-racist and anti-hate campaigner, I could think of few better people to sign the book than him. Luther is a committed Watfordian who loves our town. I am very lucky to have been able to get to know him so well over these last few months. I felt Cassiobury Park was the perfect location for the memorial book signing as it is such an important green space enjoyed by all in Watford. I wanted to thank Nic Careem for creating this project and including me. I will do all I can in my role as MP to campaign against all forms of hatred and show Watford as the inclusive and tolerant place we are.